We have been awarded further funding from Arts Council England to deliver a new project around creating more diverse music that engages with people from different ethnic backgrounds. We have selected a wonderful artistic team to work with and we are now creating some exciting new music together.

Last year on the 26th September we had our utterly incredible dementia friendly music festival at the Bridgewater Hall – the first of its kind in Manchester – bringing together many organisations, musicians and groups of people who had either engaged in the So Many Beauties project or simply wanted a fun musical day out. We had over 450 people across the day with different activities and performances on offer – all scheduled to be dementia friendly and stewarded by students from the RNCM and Bridgewater Hall staff.

You can relive some of the highlights in the short film we made below …enjoy!

A small smorgasbord of audience feedback

Why isn’t every musical event like this? Being free to participate in any way you like. The energy in the room was amazing!

We have had an amazing time. My mum cannot speak (garbled speech) but can sing clearly. She has blossomed as the day has gone on as she feels part of what is happening around her.

Everyone so surprisingly friendly, kind and helpful. Performances absolutely lovely. Had a tear in my eye more than once (nearly spoilt my usual macho image!)

What a joyous afternoon! Thanks to all involved. I (as a carer) had a great time as did the couple I was supporting.

Come and celebrate the connecting power of music at our dementia friendly music festival in Manchester on Thursday 26 September as part of BBC Music Day!

There has been a significant upsurge in publications and initiatives focussing on music and dementia in the last few weeks. A new national programme funded by The Utley Foundation – Music for Dementia was announced earlier this month. This will be given a significant boost through BBC Music Day taking place on 26th September this year. The BBC will join the campaign to ensure that there is music available to everyone living with dementia by 2020.

“From Bingo to Bartok”

Creative and Innovative Approaches to involving older people with Orchestras

Baring Foundation also released a Treasury of Arts Activities which offers 50 different arts based activities that could be used when working creatively with people living with dementia as well as some general pointers for people interested in working in this way.

I’m hoping that this increasing interest will stimulate collaborative co-creative thinking around the provision of music in the care of people living with dementia. There’s always the possibility that more and more toolkits and publications will be produced by  organisations and that people living with dementia and those who care for them will be confronted by an information jungle with no guidance on know where to turn.

Diversity of provision is essential but access to provision needs to be streamlined and simplified. It’s also essential that people living with dementia and their immediate carers have a strong voice in the emerging discussions.

The So Many Beauties (SMB) approach is to work co-creatively with people living with dementia. Between now and September, I will be having creative conversations (verbal and musical) with the wonderful people I work alongside through SMB. Together we will explore what Music for Dementia 2020 means to them, what they want, what empowers them the most. Who knows where these exciting discussions will lead? Let’s throw ideas into the air and see where they land! 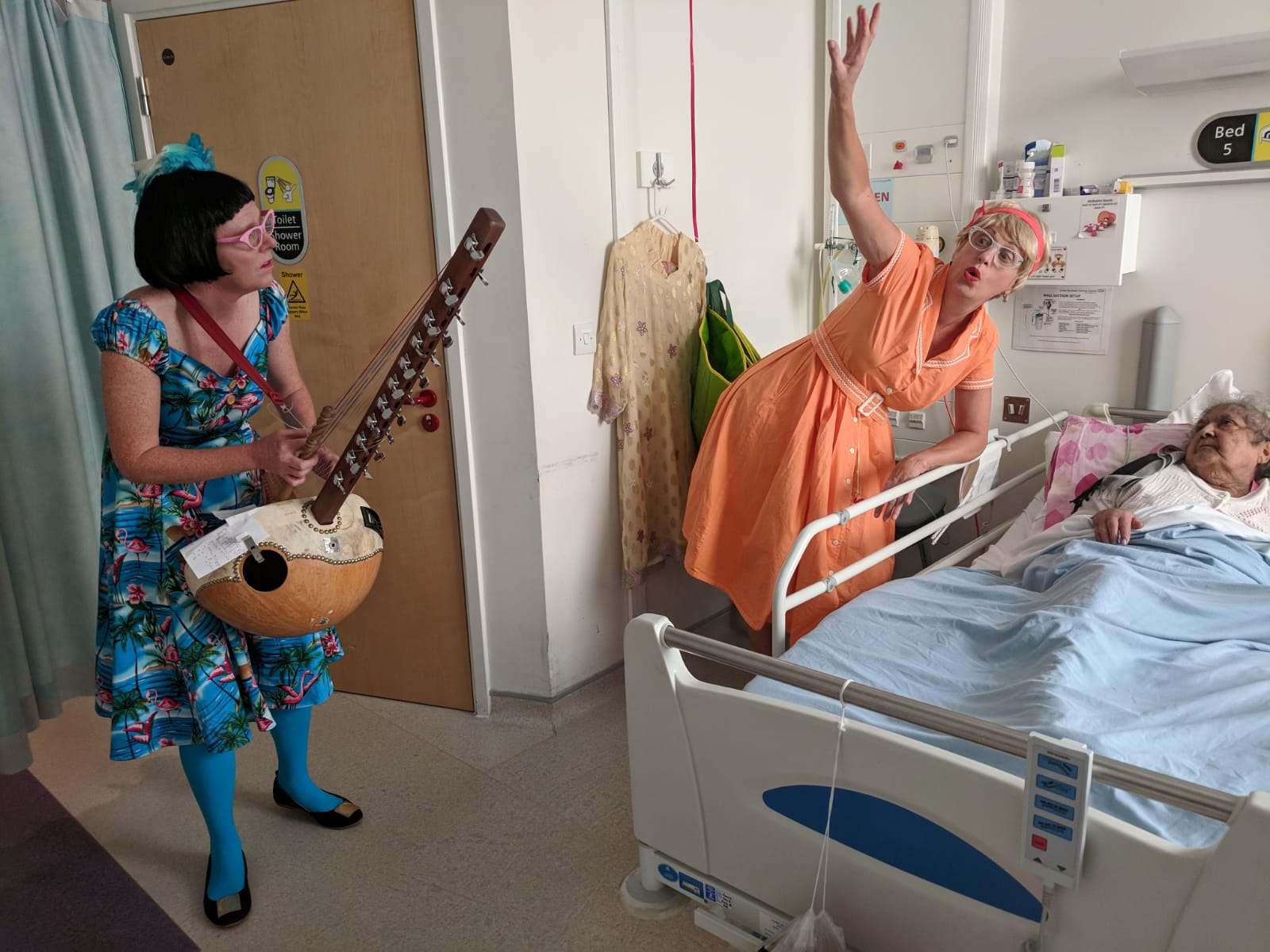 (Working “in character” with Marianne Clarac, music for health expert and clown doctor at MRI Hospital in Manchester)

Exciting news! I am looking for musicians from the voluntary/amateur music making community to take part in the next phase of the So Many Beauties project! If you are interested in learning how to create new music, poems and songs or simply sharing your own musical talents with people living with dementia, this project might be just the project for you!

Have a look at the information below to see if this is something you might like to be part of. The project carries on in 2019 so if you’re not available before Christmas you can still register your interest. 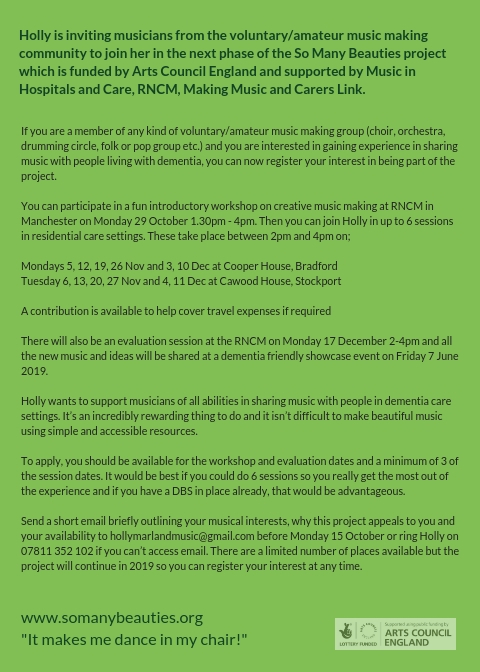 You can now view online the programme proof for April’s concert which details the project, participant settings and performers so should give you a good idea of what was involved in the creation of this lovely new choral work!

So Many Beauties Programme 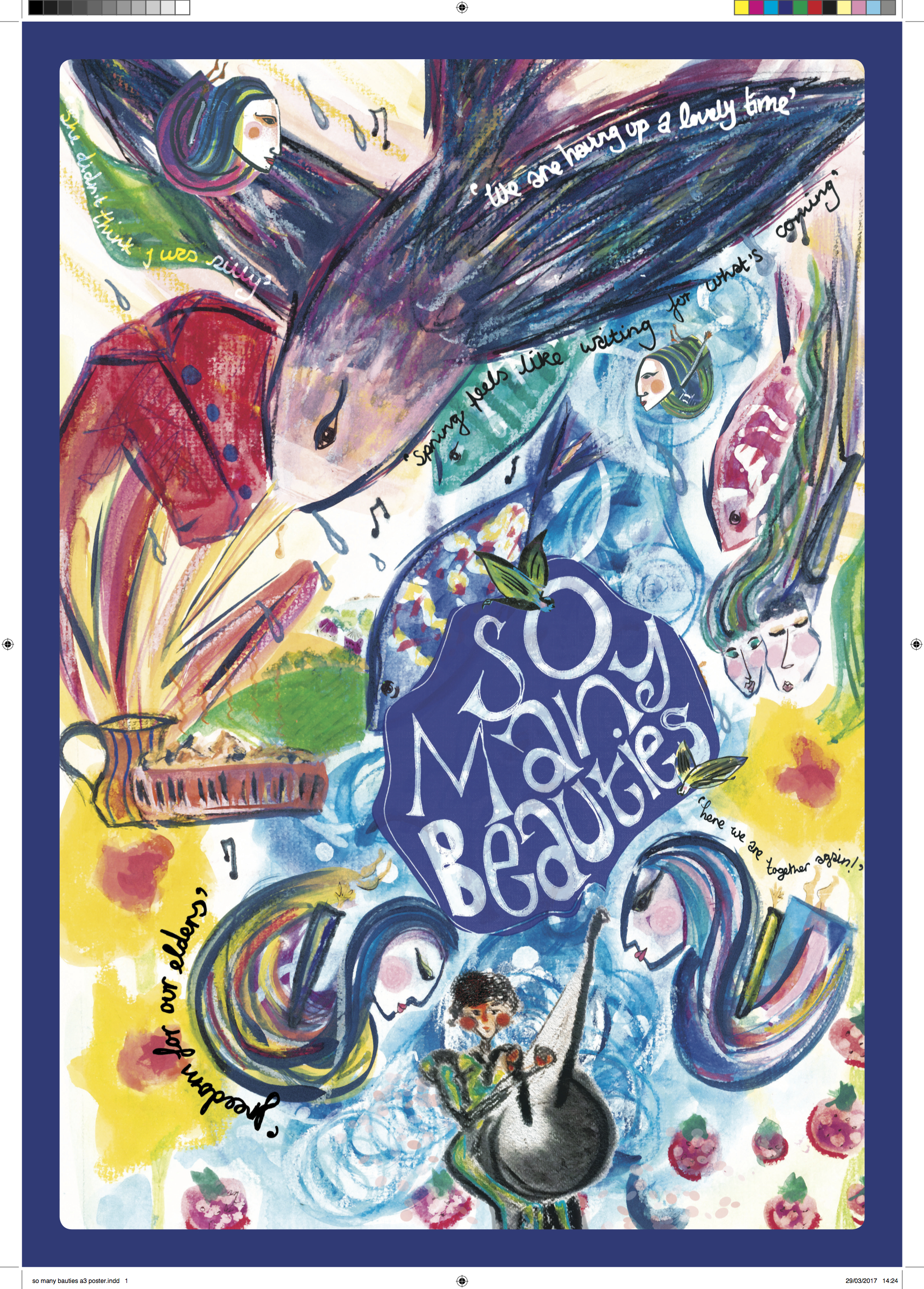 The live recording of the world premiere of So Many Beauties is now available online at Soundcloud. We hope you’ll enjoy listening via the link below! Here’s a review of the concert by St George’s member Joe Keaney.

“So many beauties” exclaimed the Polish lady with dementia when composer, singer and kora player Holly Marland and her ensemble of musicians performed by her bedside as part of a project to give people with dementia the chance to create a new musical work celebrating their creativity.

Her intuition inspired the title of Holly’s joyous and touching patchwork quilt oratorio that had its world premiere to a rapt audience at a packed Manchester Cathedral on 6th April.

Holly had assembled a children’s choir, a carers’ choir and a strong contingent of BBC Daily Service Singers and St George’s Singers, plus a musical ensemble of RNCM students under the baton of Sasha Johnson Manning for the occasion and what a belting celebration of life and the affirmative power of music they all gave!

She had recorded over 80 hours of creative material from people living with dementia and all their remarks and tunefulness weaved into this mesmerizing musical tapestry. The uplifting inclusiveness of “You’re welcome at my door” and  “God painted nature”  ran alongside the fun of “Beryl dancing in the starlight”,   “Yankety tankety” and memories of shepherd’s pie.  Musical rhythms oscillated from evocations of chilly winter to the sultry Nile by way of the familiarity of “My Bonnie lies over the ocean” and “When the Saints go marching in”.

Amid so much sunshine, Holly’s own plaintive alto solo on the Polish refrain “Moja Piekna” and “So Many Beauties” were most affecting, reflecting the shimmering vulnerability of life’s conditionality.

As the evening closed with everyone joining in “the Saints” the audience’s standing ovation echoed a specialist’s opening remarks, that we dwell not on what is lost in dementia but celebrate what is still there, alive and beating, which music can draw on and connect with. The warm, heartfelt, sustained audience applause was a tribute to that connection.”

Over 100 performers and more than 300 audience members came together for the world premiere of So Many Beauties at Manchester Cathedral last Thursday 6 April. This was the culmination of the first phase of the Adages project, created by composer and musician Holly Marland to give people with dementia the opportunity to create a beautiful new piece of choral music. Manchester Cathedral’s rafters reverberated with the joyful sounds of singing and instruments – sending out a very positive message about the incredible creativity of people with dementia. Representatives of 11 different organisations supporting people with dementia were also showcasing their services so people had the chance to pick up relevant information and to make new connections with support services.

We will be posting photos, video and audio from the concert on the Blog over the coming weeks so please stay tuned.

“It was lovely, respectful and moving”

“Much more fun than I was expecting””We thoroughly enjoyed the concert and were so impressed with all the hard work that project leader/choir/orchestra/helpers/conductor have obviously put in. What a team effort”

“Confirmed the importance of music for me – a very uplifting experience”

“The pieces were far more emotive than I had expected (sad/happy/haunting/beautiful). I had expected a’whole’ piece. The separate shorter pieces woven into the whole evening reminded me of time with my relative (sister in law with dementia) moving from happy/sad/anxious/beautiful all in the same moment.”

“It was gorgeous! So many lovely melodies – every one a winner. Thoroughly enjoyable”

“The piece has given me the idea that this is what an oratorio should be like. This concert was a triumph and a wonderful achievement for Holly and the team”

“I hadn’t realised the power of music before”

“It surpassed my expectations! Loved the humour”

Members of many local choirs joined forces for yesterday’s first rehearsal of So Many Beauties which premieres this Thursday at Manchester Cathedral. Members of Golden Voices Choir, Carers Chorus, Three Valleys Choir, Bowdon Choir, St George’s Singers, Manchester Chorale and Manchester Chamber Chorus were directed by Rose Hodgson, Holly Marland and Sasha Johnson Manning who were joined by the RNCM student participants on the Adages Project with Christopher Stokes, Director of Music at Manchester Cathedral on the piano. The rehearsal took place at RNCM who are partnering the project. Singers offered lovely feedback about the piece of music, some even moved to tears. You can get your tickets for this wonderful occasion at http://www.adages.eventbrite.co.uk. It’s advised to buy a ticket in advance to minimise queues on the door. We’re looking forward to welcoming you there!

Dawn Prescott is an award winning visual artist and designer based in Manchester. She has a degree in Interactive Art and a professional background working as a graphic designer and illustrator. Dawn created the So Many Beauties artwork and programme brochure.

Dawn has been a member of Hot Bed Press Print Makers Studio since 2013 where she experiments with different printmaking processes. Her current personal work explores the drawn line extending its possibilities through different processes such as etching, lithography and screen printing.

Dawn is also the Director of LIME based at Central Manchester Hospitals. LIME is a multi-award winning arts organisation with international recognition for establishing one of the leading arts and health programmes in the UK.

Dawn has kindly agreed to allow us to offer posters of her original artwork as raffle prizes at the event on Thursday 6 April at 7pm Manchester Cathedral. The artwork features themes and lyrics from the piece as well as Dawn’s own artistic interpretations following collaborative discussions with project lead Holly Marland.

Do get your tickets for the event in advance if you can so we can avoid long queues at the door and get everyone all nice and comfortable in good time! We’re going to be “Having up a lovely time!” as one of the project participants with dementia commented during one of the music sessions.

Tickets are available at http://www.adages.eventbrite.co.uk